Never Broken: Songs Are Only Half the Story by Jewel

Are You Old Enough to be a Jewel Fan?

In Never Broken, poet and singer-songwriter Jewel shares her unconventional childhood, her rise to fame, her marriage, and her musical journey. In her younger years, she lived on a homestead in Alaska, learned to yodel at three, and sang with her father in hotels, honky-tonks, and biker bars. Even though the family valued creativity and music, there was also trauma and instability. Jewel left home to live on her own at age 15. The following years took her to a private performing arts school in Michigan (applying for a scholarship and financing her own transportation). By eighteen, she had hitchhiked across the country, was homeless (living in her car), writing poetry, and playing in coffee shops in San Diego to support herself. A local D.J. played one of her songs, and at twenty-one, she had a following and a debut album which went multiplatinum. From there, we hear her story of complicated family, financial difficulties, insecurities, fear, survival, the breakup of her marriage, and deep heartache over the estrangement from her mother. She also shares poetry and the audio version features some singing. There’s more in the story (including Jewel’s own heartfelt advice) that can’t be covered in a brief summary. 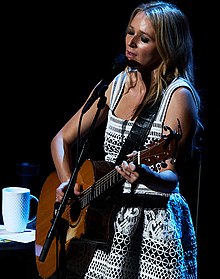 You Usually Read New Releases: This is true! However, I was reminded recently that Never Broken has been lingering on my TBR for many years because I was immersed in a teaching career when it was published and my free time was spent lesson planning!

In high school, my daughter was a huge Jewel fan and we once attended a Jewel concert at The Greek Theater in Los Angeles. I’m certain that my daughter’s past interest in Jewel’s poetry and singing motivated me to pick up her memoir. Also, it’s nice that old releases are readily available at the library! I listened to the audio which adds to the enjoyment when the author of a memoir reads her own work (she also sings a couple of songs!).

Character Traits: Jewel shares character traits with others that have experienced difficult childhoods and written memoirs (Jeanette Walls, The Glass Castle; Tara Westover, Educated; J.D. Vance, Hillbilly Elegy). Jewel grew up in Alaska, and so that also reminded me of The Great Alone. With grit and a belief in her creative abilities, Jewel is able to rise above her circumstances and carve out a dream. During her most desperate times, she turned to journal writing for comfort and escape. These writings became the lyrics for her songs. In addition to grit, determination, and survival skills, Jewel is able to view her past through a lens of compassion and forgiveness. Many children who do not receive the parenting they deserve succumb to risky behaviors. Jewel makes a deliberate choice to turn to writing.

Never Broken is equal parts fascinating and heartbreaking. I can’t imagine striking out on my own at fifteen, figuring out how to attend a private performing arts high school in Michigan with no help from anyone in my family (a family friend suggested she fill out an app for a scholarship), hitchhiking across the country numerous times, and living in my car. It was especially poignant to hear that when she managed to arrive at her high school (woefully unprepared with clothes, supplies, and life experiences) that she was expected to leave campus for Thanksgiving and winter breaks….of course she had no money to fly home and so she scrambled to find a place to stay. Jewel has amazing resilience and survival skills!

Advice: Jewel is generous with advice for living throughout her story….especially near the end. This seemed a little long and perhaps repetitive in places and I think some editing for length could have helped here. However, it’s so heartfelt and earnest and transparent, that I did appreciate it and I’m certain it is helpful.

Mother: The most heartbreaking part of the story (which she alludes to in the prelude) is that her mother took millions of dollars from her by acting as her manager. Her mom manipulated Jewel into agreeing to having her as manager and Jewel always trusted that her mother had her back and would watch out for her best interests. Jewel had to remove her mother and fie a lawsuit to regain control of her company and reputation and recoup her losses. I feel extremely sorry for her as she continues to mourn the loss of a close mother/daughter relationship.

Recommended: I do recommend Never Broken for fans of thoughtful memoir and for readers who love music and may be a fan of Jewel’s music and lyrics. In bookclub, I would enjoy discussing how she was able to rise above the tragic circumstances of her life without bitterness and create something beautiful. 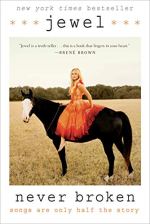 Jewel Kilcher’s musical odyssey starts in Homer, Alaska, where she began performing with her parents at six. The phenomenally successful singer, songwriter and poet (born May 23, 1974, in Payson, Utah) attended Interlochen Arts Academy on a vocal scholarship, and moved to San Diego at 18. Homeless, Kilcher sang for a living and was soon fought over by record labels. Her debut album sold more than 10 million copies. She continues to record and perform, but has also written several books, appeared on TV and in the 1999 film, Ride With the Devil.

Her debut poetry collection in 1998, A Night Without Armor, quickly became a mainstay of The New York Times bestseller list, with 29 printings and a remarkable million-plus copies sold and is the best-selling poetry book of all time. The audiobook version received the 1999 Audie Award from the Audio Publishers Association. The following year saw the publication of her second book, the intimate journal Chasing Down The Dawn, a revealing chronicle of an artist’s life on the road.

Is Never Broken on your TBR or have you read it?

Are you a Jewel fan?

“Ah, how good it is to be among people who are reading.”
~Rainer Maria Rilke

“I love the world of words, where life and literature connect.”
~Denise J Hughes

“I read because books are a form of transportation, of teaching, and of connection! Books take us to places we’ve never been, they teach us about our world, and they help us to understand human experience.”
~Madeleine Riley, Top Shelf Text

***Blogs posts may contain affiliate links. This means that at no extra cost to you, I can earn a small percentage of your purchase price.

Unless explicitly stated that they are free, all books that I review have been purchased by me or borrowed from the library.

Book Cover and author photos are credited to Amazon or an author’s (or publisher’s) website.

16 thoughts on “Never Broken: Songs Are Only Half the Story [Book Review]”

This site uses Akismet to reduce spam. Learn how your comment data is processed.

Thank You For Viewing!